An Iranian official said 500 companies from 25 countries will take part in the 10th Iran Plast exhibition in April, in an unprecedented number of participation since the sanctions against Iran were lifted. 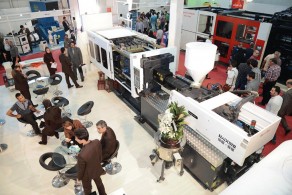 the lifting of sanctions against Iran has increased the demands from reputable European companies to attend the 10th Iran Plast exhibition.

“At the moment, the total area of the exhibition has reached 25,000 sqm, 32 percent of which are allocated to foreign companies and 68 percent to domestic firms,” he said.

It seems likely that the number of foreign visitors will rise, with other plastics industry groups pointing to increased demand in the country.

Euromap, the European Association of Plastics and Rubber Machinery Manufacturers, noted in statistics released earlier this month that world shipments of plastics and rubber machinery to Iran rose from 86 million euros ($96.1 million) in 2013 to 186 million euros ($207.9 million) last year.

That’s still well below the levels of 2005, when the world sent 250 million euros ($279.4 million) in plastics and rubber machinery to Iran, but it’s a significant turnaround from the previous two years.

“Iran is back in the game!” Euromap wrote in a presentation distributed at its Sept. 10 annual meeting in Italy.

A July report from the World Bank analyzing the economic impact of lifting the sanctions said it could pull the Iranian economy out of its two-year long recession, with at least $15 billion in additional oil revenues and $29 billion fairly immediately from the release of money previously frozen by the sanctions.

It also said foreign investment would double over the next few years, to about $3 billion per year, although it was likely to remain below its peak in 2003.